Good morning friends!  I didn’t sleep very well because I woke up in the middle of the night with a searing pain in my second toe.  It’s been kind of numb since I took up running but I never really paid it any mind.  Last night I was kind of messing with it to see where it hurt.  Well, that didn’t agree with me because I literally shot out of bed at 2:15 A.M. after being awakened from the pain.  After tylenol, icing, whimpering and generally feeling sorry for myself I was able to get back to sleep.   Surprisingly, I wasn’t tired this morning.  I’m thinking it was because I was so excited to start the month- long wardrobe challenge!  Before I get into that, a question for you guys- what weird, random injuries have you sustained from running?  I have had IT band issues but that’s pretty common.

Today marks day one of wearing only ten items (excluding accessories, undergarments, workout clothes and pajamas) from my wardrobe.  My original list says a blue tank; I changed it to my yellow tank because I have more accessories that I can wear with it.  Today’s outfit: 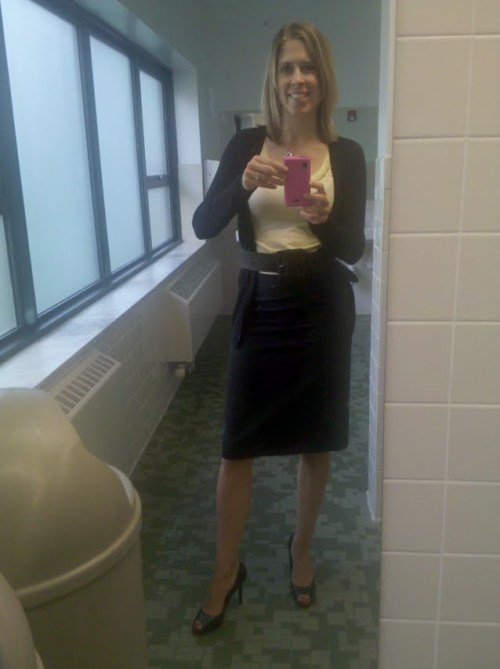 The cardigan and top make a lot of appearances in my daily wardrobe, but the same can’t be said for the other pieces.  I haven’t worn the Christian Loubotin knockoffs black pumps in probably two years.  Same goes with the belt.  So, already, the challenge is working.  I’m utilizing items in my wardrobe that I’ve forgotten that I had!  Who needs to go shopping… just look in your closet 😀

I’m also pretty excited to still be wearing items that I purchased years ago.  I am a firm believer in quality over quantity- I would much rather have a classic item in my closet that I can wear for years versus some poorly made, trendy item from Charlotte Russe Forever 21 one of the teenybopper stores.

So, challenge is off to a good start.  It should be interesting to see how the rest of the week goes!

On an unrelated note, the John Mayer concert was um, interesting.  Train opened and they were very energetic and fun.  John Mayer walked on stage and you could tell he was definitely on something.  The whole vibe of the concert was just off.  And yeah, he is so egotistical it’s almost maddening.  Coming off of great performances from Maroon 5 and OAR, I guess I was just expecting more.  He is an incredibly talented guitar player but I am not a fan of him live anymore.  He was SO different when I saw him play in Buffalo in 2007.  /endrant

Have a great Tuesday everyone.. catch ya on the flip!

Filed under What I'm wearing

21 responses to “Wardrobe Challenge- Day One”